“Endeavour” suggests that this racism is not accidental or incidental but is intentional, an integral part of Zionism.

The anti-Israel proponents who use this phrase either offer no evidence at all to support this accusation or play games with history, ascribing to Israel ethnically dodgy attitudes that more accurately describe Israel’s Arab enemies. 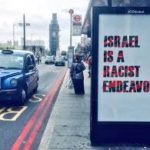 Not for the first time, the anti-Israel left has reversed reality. Consider this near-ancient but still valid letter published in the New York Times (September 29, 1985) in which an American law professor recounts several experiences that his family encountered during a visit to Israel.

As he and his wife and their toddler son walked through Jerusalem’s Arab section, Arab children spat at his son, “pulled at his hair and shouted ‘slave’ at him in Arabic.” This abusive behavior was inflicted on a toddler. And a black toddler at that, having been adopted by his Jewish (I presume) parents.

And it was not just Arab children who took the family to task. An Arab merchant asked the parents how much they had paid for him. But when this same family of three walked through Hasidic neighborhoods, they encountered a different reaction: zero. They excited no reaction whatsoever. To Jerusalem’s religious Jews, there was nothing out of the ordinary in this mixed-race family.

In his letter, the author’s point of departure was an assertion by Louis Farrakhan, anti-Semitic leader of the Nation of Islam. Farrakhan had accused the Jews of being responsible for black slavery.

The Times letter-writer noted that “the original African slavers were Arab,” and black slavery in Arab countries still existed. (True today as well as in 1985.) To the anti-Israeli hardliners who are determined to despise Israel regardless of social, political and historical facts, none of this will matter.

Their hate is deeply ingrained, immovable. But their accusations are hollow and unconvincing, empty slogans that are divisive, not conciliatory. They will harm rather than help the Palestinians they claim to support. ###