She does not yet hold any political office, and even if she wins the November mid-term Congressional election (her victory is almost assured in her heavily Democrat Queens-Bronx district), her political power–as one of 435 members of the lower chamber of Congress– will be modest.

Nevertheless, she has been catapulted into a national spotlight, criss-crossing America, campaigning–with Bernie Sanders, whom she supported during his 2016 presidential bid–for other candidates along.

She is reaching enormous audiences.

All the more reason, then, to carefully examine those words. 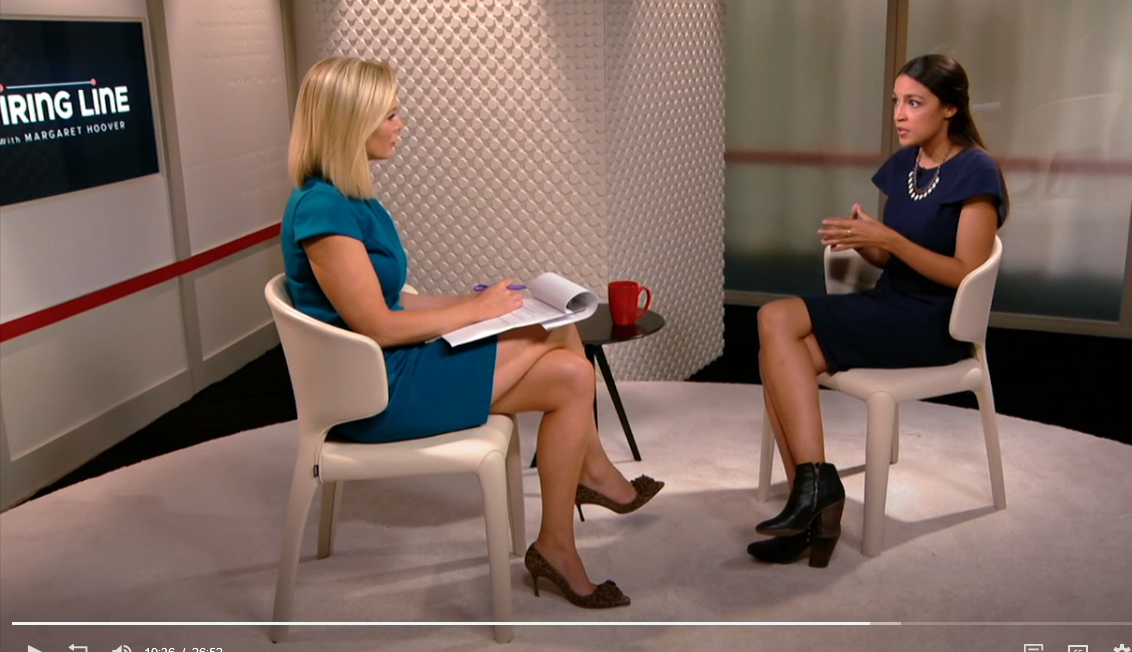 A good starting point is the in-depth television interview conducted by Margaret Hoover on Firing Line on July 13, 2018, some three weeks after the primary election.

A member of the Democrat Socialists of America, Ocasio-Cortez told Hoover that she favors federal job guarantees, universal health care, free college tuition and several other liberal/left, even socialistic, positions.

Her interests and her platform are overwhelmingly domestic, but one international topic has caught her eye: the Israel-Palestinian conflict.

On May 14, 2018, she tweeted her opinion that Israel had committed a “massacre” against the Palestinians protesting at the Gaza border. Ocasio-Cortez had obtained her information about the Gaza border incident, and was responding to a tweet, from Al Jazeera.

In the Firing Line interview, Hoover noted that Ocasio-Cortez had used the term “massacre” but focussed instead on an earlier reference by Ocasio-Cortez to the “occupation of Palestine.” What, Hoover asked, did she mean by that phrase, and what was her position on Israel?

Finally, she said that she “absolutely” supported both Israel’s right to exist and a two-state solution.

On May 14, Al Jazeera had cited 37 dead, but by the time this Firing Line interview was aired, the more accurate figure of 60 or 62 was widely reported. It was also clear that many protesters were indeed armed – and more than 40 of the dead were members of Hamas–a group committed to making Israelis, and Israel, disappear.

Ocasio-Cortez ignored the new information. In her view, the killing of 60 “unarmed” people “would just be completely unacceptable if that happened on our shores.”

In other words, she still viewed the event as a massacre, although she did not use that term.

She “also thinks that what people are starting to see at least in the occupation of Palestine is an increasing crisis of humanitarian conditions. And that to me is just where I tend to come from on this issue.”

Interviewer Hoover asked Ocasio-Cortez to explain her use of the term “occupation of Palestine.”

“Oh, um. I think what I meant is like the settlements are increasing in some of these areas in places where Palestinians are experiencing difficulty in access to their housing and homes.”

Finally tiring of pulling her feet out of her mouth, a flustered Ocasio-Cortez threw in the towel: “I am not the expert on geopolitics on this issue. I am a firm believer in finding a two-state solution on this issue, and I’m happy to sit down with leaders on both of these.”

“…An increasing crisis of humanitarian condition”

“That to me is just where I tend to come from on this issue.”

Ocasio-Cortez’s hesitations and over-simplifications and waffling suggest something deeper than the kind of linguistic problems that plagued former President George W. Bush. She is over-reliant on buzz words and slogans, and gives no indication that she has actually researched the Israel-Palestinian conflict. She speaks poorly because she thinks poorly—or not at all. She repeats leftist anti-Israel platitudes.

And it is not as if she hasn’t had the time to look into this issue, which has dominated the news for decades. Furthermore, in 2011 Ocasio-Cortez graduated, with distinction, from Boston University. Her major?: economics and international relations.

With her ers and ums and sophomoric use of “like”, she often sounds like an overexcited college student. With her vacuous word-salady delivery, she resembles Sarah Palin, another would-be political heavyweight who enjoyed a meteoric rise but, way beyond her depth, quickly crashed back to earth.

Much has occurred since the Firing Line broadcast, and I will comment on some of these developments in future blog posts. ###