On May 29, 1985, fifteen months after moving to London from New York, I watched a live broadcast of British soccer fans running amok in Brussels before the game between Liverpool and Juventus, from Turin, Italy had even begun. When it was over, the body count was 39 dead and hundreds injured. 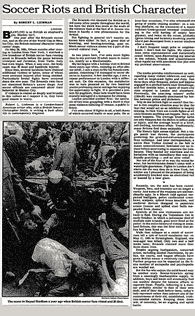 Since then, several incidents have claimed additional victims at home, some of whom were seriously injured after being stabbed. Particularly brutal fights have occurred since the new year. The Brussels riots have not chastened Britain’s soccer thugs, and soccer officials are concerned about their behavior in Mexico City.

If violence is rooted as deeply and broadly in this culture as I suspect it is, they have good reason to worry.

The Brussels riot stunned the British as did many other people throughout the world, but here the shock was more at the scale of the violence than at the fact of it. Soccer violence is hardly a new phenomenon for the British.

But fighting in general isn’t exactly unknown here either. In fact, a great deal of brawling, and boozing-brawling, goes on. Much soccer violence seems but a part of the overall cultural trait.

In two years here I’ve seen more fights that in my previous 25 adult years in America, mostly as a Manhattanite.

My list begins with a holiday visit to Bristol three years ago when, enjoying and after-dinner stroll, I saw a man strike his female companion, something I’d managed to never observe in America. A few months ago, I saw a repeat performance in London with a different cast. On this occasion, the malefactor was in turn pounced on by two besotted youths professing moral outrage but enjoying the opportunity to fight. If it provided a pretext for pugilism these lads would have been morally outraged at a lamppost for shining.

London provided another first: the spectacle of two men grappling with a third in that most violence-inducing of venues, a public library.

I’ve seen about 10 fights in all, a half dozen of which occurred inside or near pubs. On at least four occasions, I’ve also witnessed one group of youths chasing another: on a subway platform, on the concourse of the major railroad/underground terminal (culminating in the wild hurling of empty beer glasses), and twice on the street, probably (given timing and location) involving youths who’d just decamped from a soccer stadium after a match.

I don’t frequent tough pubs or neighborhoods. I don’t look for fights. My observations seem representative and statistically sound. Indeed, upon discovering my interest in this subject, friends and acquaintances often regale me with anecdotes that jibe with my personal observations.

The media provides reinforcement as well, reporting many violent robberies and rapes as well as large-scale fights and riots. Just three days after Brussels, police and hippies engaged in a pitched battle near Stonehenge, and four months later, a spate of inner-city riots erupted in London and elsewhere. Previously, the year-long miners’ strike (1984-85) was constantly punctuated by battles between police and picketers.

Why do the British fight so much? One factor in this complex situation may be that the fear that would act as an inhibitor is largely missing. In New York one avoids fights at all costs because anything can happen. Here, not much happens. The average brawler lacks not only weapons but the desire to inflict pain or injury, and the average brawl is a brief, self-limiting, harmless affair. Traditionally, many Britons find them enjoyable.

The library fight seems typical. Not a single punch was thrown, the participants preferring the grab-and-roll-around-on-the-floor technique. And your correspondent, a native New Yorker trained to the hilt in manic noninvolvement, hesitated not an instant before intervening to separate the combatants. They heeded my exertions and exhortations with an immediacy that was profoundly gratifying–and an utter relief.

Not one of the four of us was the worse for wear, but harmlessness doesn’t come with a watertight guarantee. Fights in London don’t alarm me the way they do in New York, but neither am I pleased at the prospect of being accidentally knocked onto an electrified rail or beaned by a beer glass.

Recently, too, the ante has been raised. Weapons, fists, and brutality are no longer a rarity. And some of the weapons are extraordinarily ugly. In a March raid against suspected hooligans, police confiscated crossbows, scalpels, spiked brass knuckles, and medieval devices designed to penetrate armor (maces and spiked steel balls suspended from chains).

Symbols of the new viciousness are not hard to find. During the Tottenham riot in early October, in which a policeman died of multiple stab wounds, guns were fired at the police. In the entire history of rioting in mainland Britain, this was the first time that police had been fired on.

Walls that collapse as a result of soccer riots tell a tale of horrid escalation too: on May 11, 1985 in Birmingham England, one teenager was killed. Only two and a half weeks later, Brussels claimed more than three dozen lives.

Despite ongoing hooliganism, concerted action, including alcohol restrictions, by police, the courts, and league officials have given British soccer a relatively calm year. Further progress can be expected as the finite number of sociopaths and psychopaths are weeded out.

But the fan who enjoys the mild brawl may be another story. Boozer-brawlers spring from a seemingly inexhaustible supply. In addition, boys and booze will eventually find one another, despite the keenest efforts to separate them. Finally, behaving in a manner probably similar to that of their own dads, and of their dads before them, today’s lads represent rather than subvert one of the mainstreams of their old, established, tradition-minded culture. Keeping them down will of necessity be an ongoing and uphill battle.