The May 24 incident occurred hours before the polls opened. Jacobs, who writes for the left-leaning Guardian newspaper, was not badly hurt. Neither was Gianforte. He was elected.

Jacobs’ provocation? He asked a question that Gianforte did not like about Republican efforts to pummel Obamacare—and then repeated it. Straws and camels.

Although the journalist took the knock, it was Gianforte who did not know what hit him, culturally at least.

For British journalists, going for the jugular is normal, even required. Yes, the British are still remarkably polite, genteel, and gentle – except in journalism.

President Trump got a whiff of this sharp British practice one week into his presidency when he held a joint press conference with British Prime Minister Theresa May. One journalist cited the new president’s “alarming beliefs” and managed in a single question to refer to torture, Russia, the Muslim ban and abortion. (President Trump did not even attempt to answer the question. Instead, he mocked the BBC.)

The question stunned Trump and raised hackles with many Americans, who complained on social media about the rude journalist who was giving her country a bad name.

The journalist was Laura Kuennsberg, the BBC’s political editor. And she does that sort of thing back home all the time. 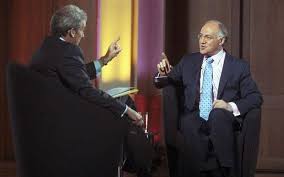 If British journalists in general are attack dogs, leader of the pack is the recently retired Jeremy Paxman, who memorably sunk his teeth into then Home Office head Michael Howard during a televised interview. Had Mr Howard, Paxman wondered, overruled an official in his own department?

British prime ministers hold the highest ministerial office but are also ordinary Members of Parliament – and journalists treat them as such. Prime ministers are regularly interviewed on radio and TV, they are not held in any particular awe, and they are grilled as mercilessly as anyone else. This evenhandedness keeps everyone on their toes. And politicians, whether aspiring or elected, don’t manhandle members of the Fourth Estate. They handle tough or frustrating situations with words, not fists.

The seemingly innocent “is” was the elephant in that sentence.

Slick Willie had been speaking honestly but slickly: Of course he had no relationship with Monica Lewinsky around the time of that interview with veteran news broadcaster Jim Lehrer.

Lehrer asked again: “No improper relationship. Define what you mean by that.”

Lehrer again: “You had no sexual relationship with this young woman?”

And Clinton again: There is not a sexual relationship. That is accurate.”

And while Lehrer is,er, was at it, he could have asked Clinton why he was using the present tense when the question concerned a past incident.

These questions were begging to be asked, and a British journalist—jarred by that suspicious use of the present tense—almost certainly would have asked it again and, if necessary, again. And again. ###